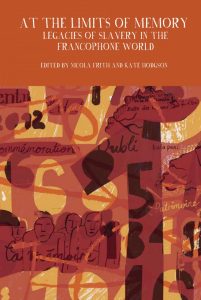 Recent years have seen a growing body of literature dedicated to memories of slavery in the Anglophone world, yet little has been done to approach this subject from Francophone perspectives. This collection responds to the urgent need to contribute to current research on slavery and memory studies by focusing specifically on the Francophone world. Featuring the scholarship of leading academics in France, Britain, the United States and Canada, the collection reflects upon contemporary commemorative practices that relate to the history of slavery and the slave trade, and questions how they function in relationship to other, less memorialized histories of exploitation, such as indentured and forced labour. The volume is set against the context of France’s growing body of memory legislation, as well as its close cultural and political connections to its former empire, all of which make it an influential player in how slavery continues to be memorialized and conceptualized in the public sphere. Contributors retrace and redraw the narrative map of slavery and its legacies in the Francophone world through a comparative understanding of how these different, but interconnected forms of labour exploitation have been remembered and/or forgotten from European, West African, Indian Ocean and Caribbean perspectives.